Before I get started on this topic, I just want to point something out. If you ever have a question: don't wait! Ask! I'm friendly, and here to help. Head down to the comments below the article and ask. I usually reply in less than 24 hours.

I remember distinctly a gentleman named Pete at one of my live training sessions almost twenty years ago. He raised his hand. I called on him. He asked:

"Martin, you've been using the word 'model' since the training started. Can you explain what exactly you mean by 'model' and how it's used in NLP?"

I looked at him and, in that moment, formulated the answer I use to this day to answer that question. Let me share a bit of that day's conversation with you...

Dictionary.com defines the term "model" as "a simplified representation of a system or phenomenon, as in the sciences or economics, with any hypotheses required to describe the system or explain the phenomenon, often mathematically."

Boy is that a mouthful! Let's get another bite!

Merriam-Webster's Dictionary also offers this definition: "a description or analogy used to help visualize something (such as an atom) that cannot be directly observed."

Let's turn this abstract gobbledy-gook into a concrete example, shall we?

Let's take the plastic sculpture of the Earth as an example. It can help us see which parts of the planet stay in the dark when one side is illuminated so we can effectively plan the position of solar power stations.

How about an illustration or map of the solar system? This could help us plan the best orbital position for a space station.

A yearly lunar calendar, on the other hand, could help us identify tidal patterns so we can plan navigation and fishing expeditions more effectively.

This brings us to an important and fundamental axiom of NLP: The fundamental criterion by which to evaluate any model is whether it's useful or not.

This is super important and I want you to read it over.

The fundamental criterion by which to evaluate any model is whether it's useful or not.

Not whether the model is true.

Not whether the model is accurate.

Not whether the model is perfect.

Not whether the model is realistic.

That's what NLP is all about.

The purpose of the field is to offer a methodology and tools that enable us to map the behavior and processes of people who stand out at what they do, a.k.a. badasses.

The main goal of an NLP Practitioner (I'll spare you the NLP belt system of "Prac", "Master Prac" and "Trainer") should be to model outstanding skills or abilities and make them available to others.

The key issue in accomplishing this is that badasses are generally INTUITIVE about what they do. That means they can't effectively teach others how it is they do what they do. This is where NLP Modeling connects directly with the power of intuition that we covered in previous articles.

An effective NLP Practitioner teases out the absolutely essential intuitive components of thinking and action necessary to get the outcome, and orchestrate them into a step-by-step description of what's needed to accomplish the same result.

That orchestration is ultimately where the "Programming" in Neurolinguistic Programming comes from. It refers to the creation of sequential, step-by-step "recipes" or programs that anyone can follow to accomplish the result. Ideally, anyone who wants to reproduce that level of performance can pick up the model and apply it.

(If you want to see examples of this, take a look at the Speed-Reading model and the Quiet Mind model.)

Earlier, I mentioned that the fundamental criterion by which to evaluate any model is whether it's useful or not. The goal of NLP modeling isn't to arrive at a correct, true, perfect or right transcription of someone's thinking or behavioral process. Instead, the goal of modeling is to create a map that someone can act on to get results.

If you read NLP's seminal book, "The Structure of Magic", you can see the product of the modeling approach. This book emerged from Richard Bandler and John Grinder's modeling work of the language patterns used by genius therapists Fritz Perls and Virginia Satir. The book teaches any therapist what questions to ask systematically when they hear a particular language pattern from a patient/client. For example:

The method systematized the process of asking questions to the point where anyone who learned the system could instantly develop a surprising level of therapeutic proficiency.

NLP Modeling is the method Bandler and Grinder used to tease out the pertinent components of Perls and Satir's behavior, and then orchestrate them into a useful working model.

While a lot of NLP modeling is performed by directly watching and embodying the behavior of the outstanding performer who serves as the exemplar, we can also perform a lot of modeling work based on written, audio or video records as well.

In order to build an explicit model of thinking and action, you need an alphabet. By alphabet, I mean a system of notation or a code that allows you to transcribe what the student of the model needs to do in their mind to get the outcome.

Let's take a look at a few examples...

Our "literal" alphabet (a, b, c, d, e, etc.), for example, is a code that allows us to transcribe sounds, mainly uttered words, into a written format. That code allows those who are versed in it (literate people) to translate it back into uttered words or images. When you read "apple", you can easily say it out loud and even visualize the fruit in your mind.

In music, there's a different kind of alphabet. It looks like this: 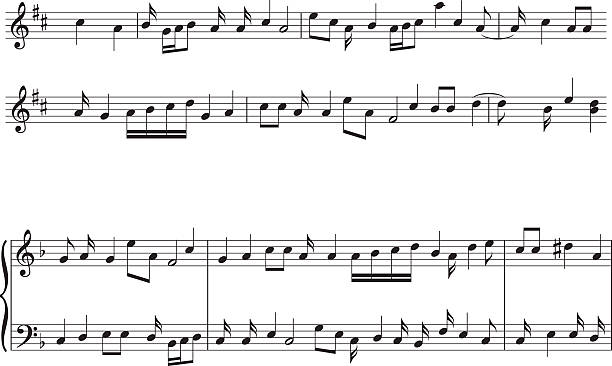 People who are versed in that alphabet or code can sit at a piano and produce a piece of music. The code tells them exactly which note to play and for how long to hold it.

Over the years, NLP Practitioners have developed an alphabet they use to transcribe people's thinking and behavioral patterns. If you've ever read NLP material, you may have come across terms like:

Each of these terms is part of the NLP alphabet, or code, used to annotate and transcribe thinking and behavior. While NLP Practitioners didn't create all of them, they've adopted them for their usefulness in the process of creating maps.

A way to hunt intuitive performance

Think of NLP as a sophisticated toolkit for hunting down intuitive performance and making it explicit.

An alphabet or code.

If you learn how to apply the method and how to read and write the code, you will for all purposes become an NLP Modeler.